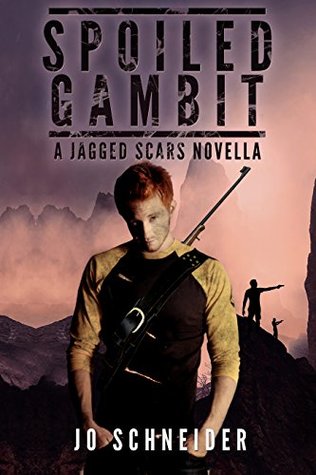 Cal screwed up. He trusted the wrong guy. Wendy almost died and Shelter fell. In an attempt to assuage his own guilt, Cal joined a dangerous mission to lead the Primate's people away from the survivors.

While laying a false trail for the Primate's Skinnies, Cal discovers some old friends, but he also finds an enemy even more dangerous than the Primate. Now the group must decide if their objective has changed. Cal will do anything to prove to the others, and maybe himself, that he is not a traitor. But will it be enough to keep his friends safe?

Before I say anything at all about this book, I just have to say - I did not expect Cal to be as attractive as he is depicted on the cover of this book. I was picturing someone way nerdier, but he is a total hottie on the cover.

If you haven't read the other books in the series, read my review of the first book, Fractured Memories.

This novella was a great way to get back into the series. It gave me a bit of a refresher on what happened in book # 4, Crippled Hope, since it had been a while since I read it. This short is just as good as the rest of the series, though.

I really like Cal! I Am so happy that he was given a whole novella to try to make up for his mistakes. I don't want to give anything away, but I hope that what happens in this novella helps give Cal a second chance in the next book.

This was a great intro to the last book in the series! I am super excited to read Broken World, now! I am just sad that the series is coming to an end.

Thank you, Jo Schneider, for sending me a copy of this book!

Posted by Meet Your New Favorite Book at 2:39 PM No comments: 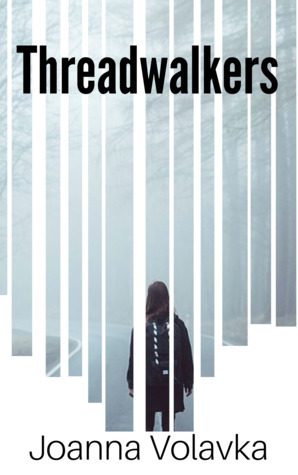 After her father's death in a plane crash, Miranda Woodard's life begins to unravel. On her sixteenth birthday, Miranda receives a mysterious gift: a small wooden box containing a needle and a spool of gossamer golden thread, left behind by her father, which begins a chain of events that soon leave her life in chaos. Her pet cat is replaced with another, her teachers don't have her on their roll call at school, even her closest friends forgot who she is. When her mother vanishes into thin air, Miranda becomes desperate for answers. She follows clues to meet a man known only as the Tailor. With his help, she must find a way to fix her life before it's too late.

First of all, I would like to thank the author, Joanna Volavka, for sending me a copy of this book!

This book started off a little bit slow, but it is definitely worth it to keep reading. Once the pace started picking up, I was completely sucked in.

I really like the way Miranda was written. Although the author wrote a realistic account of how a 16-year-old might react to such complex and scary situations, she didn't turn her into a whiner like some YA authors tend to do with teenagers in tough positions.

If you like, sci-fi, you'll love this book. If you don't like sci-fi, you should still totally read this book!

I loved this book! I hope the author writes more about Miranda's adventures! I really want to see what happens next!

Joanna currently lives in southern California with her husband, two cats, and extensive book collection. She is on staff with the International Geek Girls Pen Pals Club and spends her time writing or traveling as often as possible. She loves national parks, wildlife conservation, geeky conventions, and weird roadside attractions. She knows that Han shot first. Joanna still hasn't decided what she wants to be when she grows up, though she suspects it will probably be herself.

Posted by Meet Your New Favorite Book at 1:32 PM No comments: 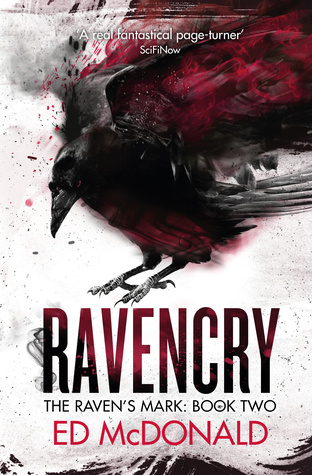 Four years have passed since Nall's Engine drove the Deep Kings back across the Misery, but as they hurl fire from the sky, darker forces plot against the republic.

A  new power is rising: a ghost in the light known only as the Bright Lady manifests in visions across the city, and in the cult that worship her grasp for power even as the city burns around them.

When Crowfoot's arcane vault is breached, an object of terrible power is stolen and Galharrow and his Blackwings must find out which of Valengrad's enemies is responsible before they have a chance to use it.

To save Valengrad, Galharrow, Nenn and Tnota must venture to darker, more twisted and more dangerous places than any they've walked before: the very heart of the Misery.

Ravencry is the second book in the Raven's Mark series, continuing the story that began with the award-winning epic fantasy Blackwing.

First of all, if you haven't read Blackwing yet, you should do that. NOW. You can check out my review of it HERE. I will try not too put too many spoilers from book 1 in this review.

Book 1 really could have been a standalone, but I am glad the author kept going with this story.

This book was awesome! It has a different storyline than the first, but with the same (and some new) characters, and of course, new magic and monsters.

I loved the ending, but hated it at the same time. It was a great, epic ending, but I wasn't happy with where it left some of the characters. I want to go into more detail and rant, but I don't want to give away any spoilers.

I was a little upset that there wasn't more Nenn and Tnota in this book. They were my favorites from the first book. I fell in love with Amaira and Maldon in this book, though.

Ed McDonald exceeded my expectations again! The only issue I have is that I have to wait until next June to read the 3rd book in the series, Crowfall!

I received a copy of this book from the publishers, in exchange for an honest review.

Posted by Meet Your New Favorite Book at 1:20 PM No comments: