When a video of Molly Richards is taken out of context and goes viral, she’s thrust into the upper echelons of social media stardom and becomes an overnight success in a country where Life Channel ratings reign supreme. As Kadar’s fastest rising celebrity, her life becomes a media circus, a show put on for the shallow national audience salivating for the next new thing.
But in a world where image is king, danger and death hide among the shadows. In the nearby country of Pacifica, the brutal Caezar turns his citizens into robotic weapons who infiltrate Kadar as sleeper transhumans. They walk among the populace, unaware they are pawns in the madman’s personal arsenal.
Only Molly, her friends, and an elite group of Kadarian fighters known as the Cyber Knights fully understand the transhuman threat, and only they can break the Caezar’s terrorist grip on both Pacifica and Kadar. Battling Fire Bots and humanoid agents, they seek to put a stop to the Caezar’s tyranny by unraveling the secrets buried between layers of deception.And they have to do it all while smiling and waving for the cameras.
As Molly and her friends peer behind the glitz and glamour, they discover something more frightening and more sinister than anything they’ve encountered yet…the truth.

Author Bio:
Erin Rhew is an editor, the operations manager for a small press, and a YA fantasy and sci-fi author. Since she picked up Morris the Moose Goes to School at age four, she has been infatuated with the written word. She went on to work as a grammar and writing tutor in college and is still teased by her family and friends for being a member of the "Grammar Police."
A Southern girl by blood and birth, Erin spent years in a rainy pocket of the Pacific Northwest before returning to her roots in the land of hushpuppies, sweet tea, and pig pickin’. She’s married to fellow author, the amazingly talented (and totally handsome) Deek Rhew, and spends her time writing side-by-side with him under the watchful eye of their patient-as-a-saint writing assistant, a tabby cat named Trinity. Erin and Deek enjoy taking long walks, drinking coffee, lifting, boxing, eating pizza, staying up late into the night talking, and adventuring together.

If you are looking for a quick, easy read, this is a good one!

I read this in between working on lots of homework and starting my internship, which is taking up most of my "spare time," since I also work full time. I was still able to get through this book in just a few days, though.

It is fun and fast-paced, and I loved the similarities it draws to today's society, with the Kadarans obsessed with their Life Channels and constantly streaming every second of their lives and watching every second of other people's lives. Thinking about just how similar Kadar's culture is to ours and how quickly our culture could become just like Kadar's is kind of scary.

This book was well written. The author did a great job with character development and world-building. I loved Molly! (And sometimes I also wanted to kick her).

I did get a little irritated with the love story in this book, though. However, I'm not a big fan of most romantic plots in stories.

This is the first book I've ever read by Erin Rhew, but I don't plan for it to be my last!

I received a copy of this book from the publishers to be a part of this blog tour, which was organized by Xpresso Book Tours.

Posted by Meet Your New Favorite Book at 8:43 AM 1 comment: 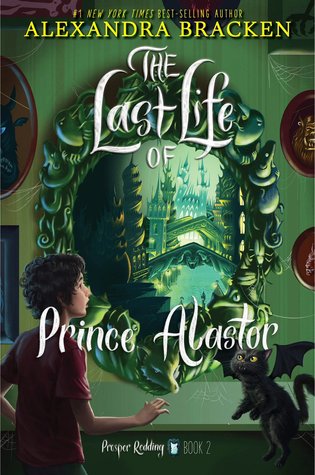 Three hundred years ago, fate-bound Prosper Redding and Prince Alastor of the Third Realm together. Now the human boy and fiend heir to the demon kingdom must put aside a centuries-old blood feud to save everything they love.

Alastor will guide Prosper through the demon realm-under one huge condition: Prosper must enter into a contract with the malefactor residing in him, promising eternal servitude in his afterlife. With Prosper's sister in the clutches of the evil queen Pyra, Prosper has no choice but to agree.

But when they arrive in Alastor's deliciously demonic home, the realm is almost as alien to Alastor as it is to Prosper - the lowest fiends have dethroned the ruling malefactors, while an unfathomable force called the Void is swiftly consuming the realm. The desperate fiends cling to the one person who says she can stop it: Pyra.

As Prosper embarks on a perilous rescue mission to the Tower of No Return, he can't help but feel for the demons losing their home- even Alastor, who lives by a set of rules that have vanished into a new world.

With the fates of humans and demons at odds, the battle lines are drawn. Long ago, Prosper's ancestor Honor Redding proved that humans and demons could never be friends. But is Prosper like his ancestor? And is Alastor the same demon who was betrayed by the one human he cared for?

If you have not read The Dreadful Tale of Prosper Redding (book #1), I recommend you read my review of it first, by clicking HERE.

I will try not to include too many spoilers from the first book, though.

I went ahead and reread the first book before starting this book since I loved it so much and it had been a while since I first read it. In that time, I forgot exactly how much I loved this series! Book #1 was just as good the second time as it was reading it the first time, and book #2 was AH-MAY-ZING!!!

I 💓💓💓 the fiends! They are my favorite! I know Alastor is supposed to be the bad guy, but I love him too! Plus, in this book, Prosper travels Downstairs, so we get to meet a bunch of other fiends!

Just like the first book, this book CRACKED ME UP! I love the author's sense of humor and how she has the fiends doing funny/silly things with such seriousness.

I absolutely LOVE this book and have nothing bad to say about it!

However, the author set the ending up where there will likely be another book added to the series, but there is no book #3 listed on GoodReads yet. That usually means that it will be a while until the next book is released. I sure hope she puts out another book soon!

I received a copy of this book from the publishers after I wished for it on NetGalley, in exchange for an honest review.
Posted by Meet Your New Favorite Book at 2:00 PM 2 comments: 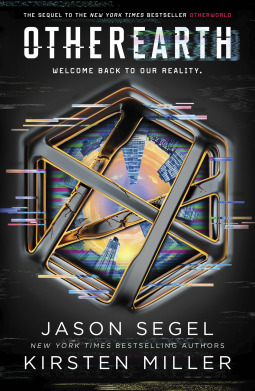 The company says Otherworld is amazing - like nothing you've ever seen before. They say that it's addictive - that you'll want to stay forever. They promise Otherworld will make all your dreams come true.

Simon thought Otherworld was a game. Turns out he knew nothing. Otherworld is the next phase of reality. It's everything you've ever wanted.

And it's about to change humanity forever.

Welcome to the Otherworld. No one could ever have seen it coming.

Return to the series BuzzFeed compared to Ready Player One in the second book in a new fast-paced trilogy from New York Times bestselling authors Jason Segel and Kirsten Miller that's perfect for fans of HBO's Westworld.

Simon saved his best friend, Kat, from the clutches of the Company and their high-tech VR gamilng experience, Otherworld. But it was at a steep price. Now he, Kat, and their friend Busara are on the run. They know too much. About the Company's dark secrets.

About the real-life consequences of playing Otherworld. And about Kat's stepfather's involvement in everything. The group is headed to New Mexico to find Simon's old roomate, who is a tech genius and possibly the only person who can help them reveal the truth about the Company before it's too late and the line between what's real and what's fantasy is erased... forever.

Imagine a future in which you can leave reality behind and give in to your greatest desires. That future is now. And the future is terrifying.

I am writing my reviews of Otherworld and Otherearth together, mostly because I rushed through them both super fast and didn't take any time in between to jot any notes down for a review like I normally do. I will make sure I do not give away any spoilers for Otherworld, for those of you that have not read book #1 yet.

I must say, I was pretty intrigued when I learned that Jason Segel wrote thsi book. When the first book was released, I put it on my TBR but never read it. I saw him on The View (don't judge me, I just happened to land on that channel while it was on and stopped because he was talking, and he is funny) and found out that he wrote these books and the second had just been released. I 💓💓💓 Forgetting Sarah Marshall! I knew he wrote that, and everything else I've seen him in has been hilarious. I already wanted to read these books after reading about them when Otherworld was released, so this was the push I needed to bump them to the top of my TBR list and read them.

There are definitely some funny parts, and the book is very well-written and the world building is excellent. The authors were able to build an amazing realistic AI world within a world and bring both to life.

The first book was really good. I sped through it and finished it within a couple of days. The second book was just as good, but the ending BLEW MY MIND! I totally did not see it coming.

I am so upset now! In the Kindle version, the page after you finish the book says Other____ coming Fall 2019" Seriously? It's like they're rubbing it in that we will have to wait a whole year to see what happens next.

So, I just recently started listening to audiobooks on my commute to work. Usually, I just want to keep reading (something that you shouldn't do while driving), so I get the audiobook of the book I am reading from the library so that I can SAFELY keep reading while I drive.

I was expecting the audiobook to be super funny and entertaining because Jason Segal narrated it. He did a good job, and it wasn't boring, monotonous, or not entertaining, but it just wasn't' what I was expecting when I started it. He does well voicing some of the characters, but I was expecting a lot more theatrics and funny-making (yeah, that's totally a word). That was just my expectation though, not something that the audiobook is advertised as or anything. It is no way was a bad audiobook, and I will totally listen to book #3 on audiobook. I just wanted to mention this in case anyone else has the same expectation I had.

Definitely, do not let this deter you from listening to it, but just don't go into it expecting him to do voice work as if it were a cartoon or something. It is an audiobook, and we are adults (kind of). lol

I loved these books! I am happy that I waited until the 2nd book was released to read the first so that I didn't have to wait to read it, but I am upset that I have to wait to see what happens next! I'm not sure when book # 3 will be out. It isn't listed on GoodReads yet, so I assume it will not be anytime this year. 😥

Posted by Meet Your New Favorite Book at 2:00 PM No comments: