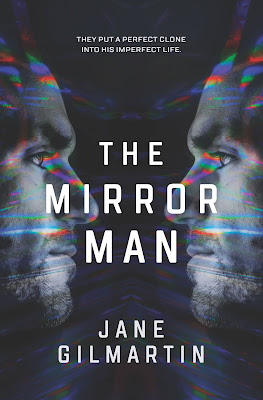 The offer is too tempting: be part of a scientific breakthrough, step out of his life for a year, and be paid hugely for it. When ViGen Pharmaceuticals asks Jeremiah to be part of an illegal cloning experiment, he sees it as a break from an existence he feels disconnected from. No one will know he's been replaced -- not the son who ignores him, not his increasingly distant wife--since a revolutionary drug called Meld can transfer his consciousness and memories to his copy.

From a luxurious apartment, he watches the clone navigate his day-to-day life. But soon, Jeremiah discovers that examining himself from an outsider's perspective isn't what he thought it would be, and he watches in horror as "his" life spirals out of control. ViGen needs the experiment to succeed - they won't cal it off, and are prepared to remove any obstacle. With his family in danger, Jeremiah needs to finally find the courage to face himself head-on.

Jane Gilmartin has been a news reporter and editor for several small-town weekly papers and enjoyed a brief but exciting stint as a rock music journalist. A bucket list review just before she turned 50 set her on the path to writing fiction. Also checked off that list: an accidental singing career, attending a Star Trek convention, and getting a hug from David Bowie. She lives in her hometown of Hingham, Massachusetts.

I've been looking to branch out a little and read some different things.
I really enjoyed this book. I read it in about a day and a half. That is the quickest I have read a book in a while.
Although part of that is because I haven't had time to sit and read a whole book that quickly in a while, the fact that this book immediately sucked me in and made me want to keep reading to see what happens next.
This book's release also had really good timing. Lots of people are in quarantine right now, which made it a little easier to empathize with the main character, who was stuck in the apartment, watching his clone live his life on the television.
The author did a great job of keeping things suspenseful. A couple of times, I thought I knew what was going to happen but ended up being wrong. I love it when authors are able to surprise me like that.
Thank you to the author and the publishers for inviting me to participate in this blog tour!
Posted by Meet Your New Favorite Book at 10:00 PM No comments: