Though relations between Princess Seraphin Fitzempress and her father have been strained, Sera's royal position has remained unchallenged. Filled with self-doubt, she struggles to grasp the Mysteries- her greatest trial yet.

An education in the enigmatic magic is a necessary one, should Sera plan to rise in her station and invoke her powers during war. But the emperor's death now leaves both Sera and her ambitios father eligible for the throne- a contest the prince regent intends to win. Even if it means an alliance with a rival empire.

Sera's hope lies in Cettie, a waif raised in the world below, whose life has intertwined with sera's in the most unexpected ways. The Mysteries come easily ot Cettie, and her studies have begun to yield new insight into her growing powers. But those same powers put Cettie in the path of those who would destroy her.

Now as the threat of war ignites and an insidious sickness spreads throughout the kingdom, Sera and Cettie will need to gather their courage and fight for each other's lives... and for the future of their endangered world.

This book picks up several years after the first book in the series, Storm Glass, left off.

WARNING: SPOILERS FROM THE FIRST BOOK AHEAD. If you have not read Storm Glass, it's review instead by clicking here: Review of Storm Glass

When the book begins, Cettie and Sera have been at Muirwood Abbey for the past 4 years, learning the Mysteries.

I would love for Jeff Wheeler to write a novella telling more about what happened in the 4 years between Storm Glass and Mirror Gate.

As we learned in Storm Glass, Cettie has an affinity for the Mysteries, and they come to her easily. Sera, on the other hand, sucks at it, and not mastering the Mysteries may put her destiny at risk.

One thing that frustrated me in this book is how everyone kept explaining that all Cettie's problems would be solved once she learns the Mysteries, even though some of those problems were life threatening, and no one ever recommended taking the test early or anything... Not even a couple of weeks earlier than planned... Smh

I read a retweet that said sometimes I want to hug Jeff Wheeler, and other times, I want to throw him off the edge of a sky manor. I had the same feelings several times while reading this series! I've been on a roller coaster of emotion throughout both books!

OMG! That is all I have to say after reading this book! I don't want to give away any spoilers about this book or it's ending, so please just go read it!

This book was just as good, if not better than the first book! I am glad we finally learned a little more about the Mysteries, though! I was getting tired of everyone talking about them and not explaining anything.

The only thing I'm not happy about is having to wait to see what happens next! I looked on Jeff Wheeler's website, and it looks like book #3, Iron Garden, will be released in November, which is waaaaay too long.

This book was AH-MAY-ZING! Again, Jeff Wheeler blew my mind! I can't wait to read the next book in the series! If I can't find an ARC soon, I plan to read the Kingsfountain and the Legends of Muirwood series so that I understand more about Cettie's world.

I received a copy of this book from the publishers, via NetGalley, in exchange for an honest review.
Posted by Meet Your New Favorite Book at 9:14 AM No comments: 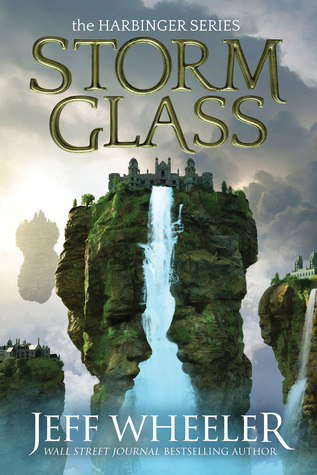 Theirs is a world of opposites. The priviledged live in sky manors held aloft by a secretive magic known only as the Mysteries. Below, the earthbound poor are forced into factory work to maintain the engine of commerce. Only the wealthy can afford to learn the Mysteries, and they use their knowledget to further lock their hold on society.

Cettie Pratt is a waif doomed to the world below, until an admiral attempts to adopt her. But in her new home in the clouds, not everyone treats her as one of the family.

Sera Firempress is a princess born into power. She yearns to meet the orphan girl she has heard so much about, but her father deems the girl unworthy of his daughter's curiosity.

Neither girl feels that she belongs. Each seeks to break free of imposed rules. Now, as Cettie dreams of living above and Sera is drawn to the world below, they will follow in the paths of their own choosing.

But both girls will be needed for the coming storm that threatens to overturn both their worlds.

First, let me tell you something that I think is ABSOLUTELY AMAZING!!!

Even though this book was just released on June 19th, the sequel, Mirror Gate, is going to be released on August 28th! How awesome is that? One of the things I hate most about reading a good series is having to wait a year or more for the next book to be released. Thank you so much, Jeff Wheeler, for taking your readers into consideration and not making us wait on the edge our seats for who knows how long to see what happens next!

Something else that is ABSOLUTELY AMAZING: THIS BOOK!

I wasn't aware that the author of this series also wrote the Legends of Muirwood series. I actually won one of the Muirwood books in a giveaway on GoodReads, and I just never got around to reading them. I will now! This book is based on some aspects of the world in the Muirwood series, just very far into the future.

To understand this series, you don't need to read the other series first. However, now that I've become so interested in Cettie and her world, I definitely want to read the Muirwood series. The author's other series, Kingfountain, also looks really good!

Something that irked me a bit was that Cettie was so quick to leave the kids and Joses in the Fells. She was so concerned with their welfare but asked to leave She knew Joses was likely in jail and their guardian is a drunk who doesn't feed them, you would think that she would be more concerned about making sure that would be alright. This was just a little detail that made me scratch my head. It didn't detract from the story, though.

The author did an excellent job at world building and character development! I really like Cettie and Sera, and of course, Fitzroy! Sera's dad really pissed me off, though! He is a total assbutt! (Sorry, I've been watching way too much Supernatural.)

This book had so many twists and turns. I couldn't put it down, and I loved the ending! I am so happy that I have the sequel so that I can start reading it right now!

the author stated that this series will have 5 books. Since the first 2 are the only ones listed on GoodReads,  it might be a while before I get to see what happens next, so it's a great time to catch up on some of his other work.

I received a copy of this book from the publishers, via NetGalley, in exchange for an honest review.
Posted by Meet Your New Favorite Book at 3:59 PM No comments: 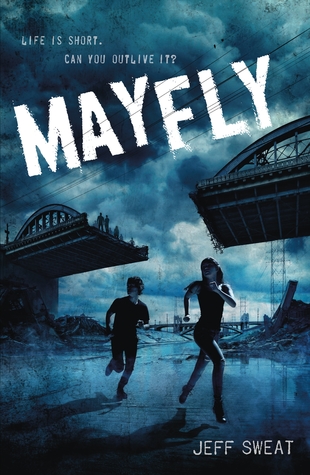 Jemma has spent her life scavenging tools and supplies for her tribe in their small enclave outside what used to be a big city. Now she's a teen, and old enough to become a Mama. Making babies is how her people survive - In Jemma's world, life ends at age seventeen.

Survival has eclipsed love ever since the Parents died of a mysterious plague. But Jemma's connection to a boy named Apple is stronger than her duty as a Mama. Forced to leave, Jemma and Apple are joined in exile by a mysterious boy who claims to know what is causing them to die. The world around them, and their time is running out. Is this truly the End?

This book was AWESOME! I loved it!

It is set in a post apokoliptic world (yeah, I know that's not how you spell it. Read the book!), where there are no adults, and everyone dies when they turn 17. In Jemma's group, girls rule, boys are only kept around for necessities, and when a girl turns 15, she must become a Mama to help populate the next generation.

If you've read the Gone series by Michael Grant, which was also awesome, you might find a few similarities (minus all the talk about baby making).  However, in Gone, the adults disappear in the first book, and the kids have to figure out how to live without them. In Mayfly, the adults have been gone for quite some time, and the kids have their own culture and systems set in place, with jobs for everyine, starting from a very young age. Also, everyone dies at 17, which is a total bummer! It also, as you might expect, leads to some interesting plot lines.
I ❤Jemma and Apple, but Pico is my favorite! Also even though this book touches on some pretty heavy topics (like rape), there is also humor sprinkled throughout the book.
This is Jeff Sweat's debut, and I can't wait to see what he does next. Hopefully, he writes a sequel, although there is no info on GoodReads about one, yet. 😞

Posted by Meet Your New Favorite Book at 1:10 PM No comments: