Lights Out by Ted Koppel 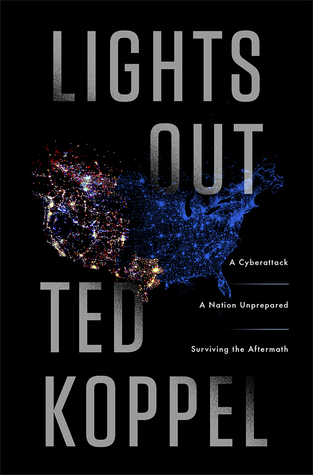 Prior to reading this book, I'll admit, I had no clue how electricity even works.

At first, I expected this book to be a what-if scenario. Like, "this is what will happen if terrorists cyber attack the U.S. power grid..."

However, it is so much more than that. This book examines who might attach, the vulnerabilities, who is responsible for what when it comes to electricity, as well as who is planning and trying to prepare for a future attack. It also investigates those who believe it is not if, but when an attack occurs, as well as the naive, who do not believe an attack could occur.

There are many things kept secret about the power industry. They will not even go as far as to divulge how many Large Power Transformers (LPTs) exist, and their parts are not interchangeable, as most are custom-built. So, extra parts are not just lying around.

Jeh Johnson, the Secretary of the Department of Homeland Security, said in a response to being asked how LPTs, weighing 1/2 million pounds or more, and costing between $3 and $10 million each, of which over 75% are only made overseas, many of which are 30 to 40 years old and were transported to their current locations by railways that no longer exist,

"I'm sure FEMA has the capability to bring in backup transformers... (but) if you want an inventory and a number, I couldn't give you that."

The government is in as much of a clusterfuck as it usually is... no, actually moreso in this case. Half of them won't admit there is a risk of a potential attack, then there's the other half that this if, not when.


Virtually all of our civilian critical infrastructure - including telecommunications, water, sanitation, transportation, and healthcare - depends on the electric grid... The consequences of a large-scale attack on the U.S. grid would be catastrophic for out national security and economy.

People are less concerned with what exactly happened than with how long it will take to restore power. This is a society that regard information, the ability to communicate instantly, as an entitlement.

With the internet giving rise to "filter bubbles" that decrease users' exposure to conflicting viewpoints and reinforce their own ideoligied frames.

Today, there is an expert to support almost any point of view. It has never been more difficult to convince the American public of anything that it is not already inclined to believe.

Ours has become a largely reactive culture. We are disinclined to anticipate disaster, let alone prepare for it. We wait for bad things to happen and then we assign blame.

This book really made me think:


It is difficult for anyone holding public office to focus attention on a problem without being able to offer any solution. Then, too, the American public needs to be convinced that the threat is real. And let the record show: it is not easy to convince the American public of anything.

Under current conditions, timely reconstitution of the grid following a carefully targeted attack if particular equipment is destroyed would be impossible , and according to government experts, would result in widespread outages for at least months to 2 years or more, depending on the nature of the attack.

If 9 of the country's most critical substations were knocked out at the same time, it could cause a blackout encompassing most of the U.S.

A 2008 congressional commission estimated that only 1 in 10 of us would survive a year into a nation wide blackout, the rest perishing from starvation, disease or societal breakdown.

Perhaps one of the best examples of our culture's reactive nature comes from a local fireman. The captain on duty assured the author that in case of a catastrophe, there are "secret locations where food and water have been stored."


"For all of us?" I asked
"No" he acknowledged. "Just the first responders."
"What about the rest of us?"
He considered the question for a moment, and then conceded that he would be awaiting further instructions.
"And when you get those instructions," I wondered, "how will you communicate them to the rest of us, when the electricity is out?"
"I'm due to retire in a couple of years" said the captain. "I'm hoping it doesn't happen before then."

Americans don't want to be to blame after a disaster strikes, and they are completely unprepared. But no one wants to spend the time, and certainly not the money, planning and preparing for something that hasn't happened yet, and we don't know when (or if) it will happen.

"There's a real danger here. And I think we just haven't done nearly enough. There's not enough awareness of it, but also, government is asleep at the switch." - Ray Kelly (NYPD)

When I first started this book, I was a little disappointed, because it is different from what I was expecting. After the first 50 pages, it got extremely more interesting. The first part of the book is a little slow, but necessary to understand the rest of it... That is, unless you already understand much more than I about electricity, the power grids, and who is in charge of what... The author does a great job at teaching someone who has no idea about electricity, the internet or cyberattacks. Then he delves into the issues.

SIDE NOTE:
The author is long-time friends with the former Wyoming senator, Alan Simpson (83).

Simpson befriended Norman Mineta while he was in a Japanese internment camps during WWII.
Only 2 years after Pearl Harbor, parents and mentors of a Boy Scout troop in Cody (WY) encouraged their children to befriend members of the Japanese-American troop.

I read Gasa Gasa Girl Goes to Camp a while back. In the book, the author discusses envying the white Girl Scout troop and their camping trips. She states that Japanese girls were not allowed to join the white troop, and they did not have a Japanese equivalent.

Ok, sorry about that little detour, but it made me wonder about other Japanese boys' and girls' experience with the Scouts during that time.

Back to Lights Out:

The author talks with doomsday preppers, who are likely to fare out far better than most, in the event of an attack on the grid.

One of the main things that resounded with all of the preppers (no matter what kind of catastrophe they feared and were prepping for, be it natural disaster, EMT or nuclear attack) was their self-interest. When asked what about others who need help or what about friends and neighbors, the general assent was that they should have listened and prepared better. All understood that conflicts were likely to ensue over possession of their preparations.

One said, " Of, that could get ugly at some point."


Not only would he and his ranch hands survive a cyberattack on the electric power grid that serves Wyoming, they would barely notice it.

But when asked how he thought a city like NYC would do, he "seemed genuinely stumped.

Unlike the doomsday preppers, "Bob Medel seems like a genuinely caring man, and he wants to be helpful... (and he) stresses not survival skills, nor land investment, but community involvement."

However, these techniques may not help in big cities, and "Wyoming does have an unusually strong culture of both self reliance and civic cooperation."

Important to note: Wyoming has the smallest population of any state in the U.S., and gun ownership is the highest in the country (62.8%).

Have you ever been to Utah? I have.

And when I saw the next chapter I was about to read was titled "The Mormons," I understood...but not to the degree I thought I did. I've read a little about Mormon beliefs, but I didn't know much about their history and what makes them so prepared for a nation-wide, long-lasting disaster.


No group of comparable size comes close to matching the scale and organizational discipline of the Mormon's efforts to prepare for whatever catastrophe may come. Their example is hardly an easy one to follow, but it serves as a model of what can be done.

Their reaction to Hurricane Katrina is the perfect example of this:


While FEMA was floundering, the church dispatched 10 trucked fill of tents, sleeping bags, tarps to cover wrecked roofs, bottled water, and 5 gallon drums of gas to New Orleans and other hard-hit areas.

One article called it "a performance that put the federal government to shame."

No matter how charitable the Mormons are, though, they can't save us all, in the event of long-term power outages.


"We hope that (in the event of a nation-wide disaster) all the families have enough to care for themselves and to help their neighbors. But there is no way we can take care of the whole country."

I love how each chapter title was followed by a quote that applied to the chapter!


"For every complex problem, there is an answer that is clear, simple and wrong." - H. L. Mencken

I enjoyed this book much more than I ever thought I would! Even though it was completely different than I expected, it completely exceeded my expectations.

I know this was long, but I only scraped the surface. Koppel goes much deeper and explores much more! It had me so enthralled that I did not want to put it down!

I encourage you to read it, and learn more about what's not happening to prepare and protect us from an attack on the power grid.

I received this book from the publishers, via Blogging for Books, in exchange for an honest review.

My GoodReads Review
Posted by Meet Your New Favorite Book at 2:21 PM