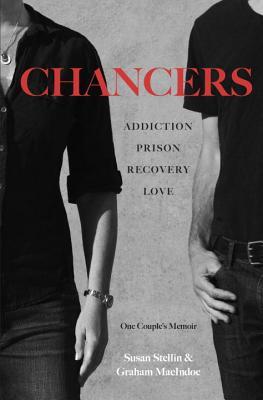 In this powerful double memoir, a reporter and a photographer tell their gripping story of falling in love, the heroin habit that drove them apart, and the unlikely way a criminal conviction brought them back together.

When Susan Stellin asked Graham MacIndoe to shoot her author photo for an upcoming travel book, she barely knew him except for a few weekends with mutual friends at a summer house in Montauk. He was a gregarious, divorced Scotman who had recently gotten sober; she was an independent New Yorker who decided to take a change on a rough-around-the-edged guy.But their relationship was soon tested when Susan discovered Graham still had a drug habit he was hiding.

From their harrowing portrayal of the ravages of addiction to the stunning chain of events that lef to Graham's arrest and imprisonment at Rikers Island, Chancers unfolds in alternating chapters that offer two perspectives on a relationship that ultimately endures against all odds. Susan follows Graham down the rabbit hole of the American criminal justice system, determined to keep him from becoming another casualty of the war on drugs. Graham give a stark, riveting description of his slide from brownstone Brooklyn to a prison cell, his gut-wrenching efforts to get clean, and his fight to avoid getting exiled far away from his son and the life he built over twenty years.

Beautifully written, brutally honest, yet filled with suspense and hope, Chancers will resonate with anyone who has been touched with the heartache of addiction, the nightmare of incarceration, or the tough choice of leaving or staying with someone who is struggling on the road to recovery. By sharing their story, Susan and Graham show the value of talking about topics many of us are too scared to address.

I requested this book several *cough* months ago... As I may have mentioned at some point, I was really busy for a spell, and even if I got to read, I certainly couldn't find the time to blog and write reviews, much less anything that anyone else would want to read.

I'm still really busy these days, but I'm finding ways to make time for reading and blogging and such. So, when I finally went in and downloaded my Netgalley shelf, I had truthfully forgotten what this book was about and why I requested it. I only remembered that it was a memoir of a couple.

My first impression, 36 pages in: I have been in one of the whirlwind relationships that Susan describes at first, with a person who is so charming and charismatic that it's magnetic, and you can't pull away. At this point, it almost seems like she is trying to make herself seem super sensible and responsible, but I know from first hand experience, no matter how put together you are, a person like that, pursuing you like that, makes you lower tat guard and act reckless when it comes to them.

As if reading my mind, I came upon the next chapter, which is written by Graham. At this point, I remembered reading that this was a couple's memoir, but I didn't realize that the chapter alternate between Susan and Graham's POV. I don't think I would have believed some of Susan's story if it weren't for Graham backing her up. However, I figure that she probably had the last say in how the book turned out, especially from the way her personality is depicted. I ended up liking both of them much more throughout the book than I did when I first started reading.

I've never heard of, or read, a memoir, especially one about addiction, written by a couple. It's "brilliant" (yes, that's quoting the Scot that wrote half the book! By the time I was done with it, I was describing everything as brilliant). The concept is just BRILLIANT!

I really enjoyed this book and getting to hear two sides to this story. I've read lots of memoirs, and after I finished this one, I thought about how the book would have turned out if it only featured one perspective, and I think it would really be lacking. I don't think I would have read it if it was only from Susan's POV.

I probably would have read it if it was only written from Graham's POV, and he might have even revealed more in that case. However, it would have taken away one of the biggest themes of the book: Sometimes you just can't five up on someone you love, and occasionally it takes the person you love hanging on through it all to pull you up when you hit rock bottom.

Posted by Meet Your New Favorite Book at 11:58 AM