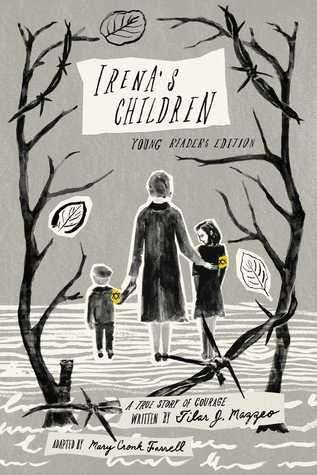 From New York Times bestselling author Tilar Mazzeo comes the extraordinary and long-forgotten story of Irena Sendler -- the 'female Oskar Schindler' -- who took staggering risks to save 2,500 chidren from death and deportation in Nazi-occupied Poland during World War II -- now adapted for a younger audience.

Irena Sendler was a young Polish woman living in Warsaw during World War II with an incredible story of survival and selflessness. And she's been long forgotten by history.

This young readers edition of Irena's Children tells Irena's unbelievable story set during one of the worst times in modern history. With guts of steel and unfaltering bravery, Irena smuggled thousands of chldren out of the walled Jewish ghetto in toolboxes and coffins, snuck them under overcoats at checkpoints, and slipped them through the dank sewers and into secret passages that left to abandoned buildings, where she convinced her friends and underground resistance network to hide them.

In this heroic tale of survival and resilience in the face of impossible odds, Tilar Mazzeo and adapter Mary Cronk Farrell share the true story of this bold and brave woman, overlooked by history, who risked her life to save innocent children from the horrors of the Holocaust.

I have read several books about people who were sent to concentration camps during World War II, but I haven't read a book that focuses on the people who helped those being persecuted and subject to atrocities at the hands of the Nazis. And after reading this book, I have no clue why not!

Note from the author: "Some parts of the story are so terrible, I didn't want to write them, they might be sad and painful for you to read. But if we don't know abut the Nazi's brutality, we can't begin to understand Irena's journey."

This book is an edition designed for young readers. However, it is an enjoyable read for all ages. It was an especially good read for someone who didn't know anything about Irena and her brave acts during the war.

Irena was younger than me when the war started. When I think about what I was doing and what my mindset was at the same age that she was doing AMAZING things and saving lives... smh *sigh*

Before the war, Irena worked at a social welfare office that ran soup kitchens all over Warsaw. When she could no longer help people with the soup kitchens, she recruited her friends to help save children from being killed by the Nazis.

I am sad that more people don't know Irena's story. The end of the book explains a little about why that is, thought.

After WWII, the Soviet's didn't like Irena and her group that worked so hard to save OVER 2,500 CHILDREN. So, her story was buried and wasn't dug up until 1999, when a group of American teenagers produced a play for their high school about Irena's life, called Life in a Jar.

More people should learn this part about what was going on during WWII! Lots of people have heard the story of brave people who hid from the Nazis and escaped death, but Irena and her friends did not hide. They risked their lives on a daily basis, stood up to the Nazis and played their game, often outsmarting them to help save lives.

Irena Sendler was a short, blond woman that the Nazis, and most others that met her, underestimated. This, combined with her intelligence, courage and compassion, led to saving over 2,500 children.

This book was EXCELLENT, and I recommend it to absolutely everyone. It is touching, inspiring, and a great, quick and easy read.

Posted by Meet Your New Favorite Book at 3:56 PM