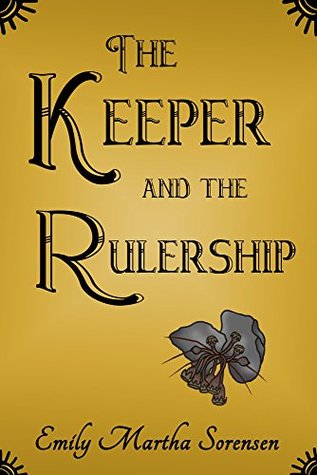 In a world where both magic and mathematics are forbidden, Raneh is growing magic, and she can't seem to stop. She'll face the death penalty if anybody ever catches her, so she hides it in the weeds of her family's land, pretending to be a typical eighteen-year-old heir. And it works.

Until the Ruler comes to visit.

An Excerpt from The Keeper and the Rulership:

"And the worst part is," Jontan went on, piling up a stack of carefully extracted slipgrass behind him, "you can't even get your magicians to help remove them! They absorb any magic that comes near."

"Uh... yeah." I pushed my magic far into the groverweed, which sucked it up eagerly. "I think I've heard that."

"I've heard, in the really bad infestations," Jontan said in a lowered voice, "they actually burn the ground to get rid of everything. Filias, roots, seeds, everything. Can you believe that?"

"Well, if the groverweed has taken over..." I began absently. The plant in front of me flourished and unfurled several buds. Blackedned lumps blossomed and spurted me with grey pollen dust that reeked faintly like ash. Argh!

Fortunately, Jontan still had his back turned. "I mean, it wouldn't be so bad if groverweed was actually useful for something. But you can't eat it, you can't make clothing out of it, and the flowers are the ugliest things I've ever seen. Have you ever seen one in full bloom?"


Emily Martha Sorensen writes clean fantasy for every age level, particularly young adult, middle grade, and clean new adult. (Yes, there is such a thing, thank you very much! College students can have fun, clean fantasy adventures, too!)

She also draws comics: A Magical Roomate is about a wizard-in-training who's forced to go to college in our world, and To Prevent World Peace is a magical girl series from the point of view of the villains.


I read this book in one day... really in a few hours. It was a great, easy read! It was also really well thought out. The world building was excellent, and while trying not to give much away, the positive aspects and faults of the world were highlighted nicely.

I really liked the main character. While pressure was put on her to find a husband, not only did she stick to her morals and standards, but she also didn't get dumb and goofy over any guy that gave her attention and she thought she might be attracted to. Although occasionally, I got a little annoyed at the way Renah reacted to some of the things some characters did, I couldn't get mad at it. It really fit in well with the story and portrayed the society she was raised in.

This book was very unique in many ways, and I found it quite refreshing. It had romantic aspects, but it didn't fuss over them or dwell on them too much.

This book was AWESOME, and I can't really find anything that I didn't like. I can say that I think it could have been longer and added a little more detail toward the beginning about Renah's world and the significance of the flowers.

I received a copy of this book in exchange for an honest opinion.

Posted by Meet Your New Favorite Book at 4:00 PM