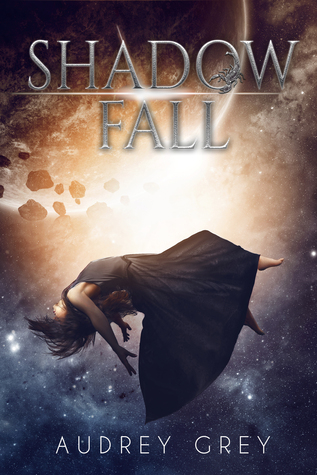 The asteroid hurtling toward the earth will kill billions.

The Emperor and his Gold Court will be safe in their space station, watching from the stars. The Silvers will be protected underground. But the Bronzes must fight it out at the Shadow Trials for the few remaining spots left on the space station.

When an enigmatic benefactor hands Maia Graystone a spot in the Trials, she won't just get a chance at salvation for her and her baby brother, Max: She gets to confront the mother who abandoned her in prison, the mad Emperor who murdered her father, and the Gold prince who once loved her. But it's the dark bastard prince she's partnered with that will make her question everything, including her own heart. With the asteroid racing closer every day, Maia must trust someone to survive.

The question is who?

I found Shadow Rise on NetGalley, and it looked so good that I decided to actually buy this book when I couldn't find it at the library or anywhere else online for free.

If you have read some of my previous posts, you may know how cheap I am. This is only the second book I've actually bought in years... like a lot of years.

Just to emphasize how significant it is for me to BUY a book, here an excerpt from my post about the one other book I've bought in the past at least 7 to 10 years:

I have not actually purchased a book in years. Anything that I can't get from the library or request to read and review, I usually just wait until I can. To emphasize my point, let me give you an example, a few of the best series I've read in the past couple of years, I was literally DYING to read the next book in the series. Even after being super upset at having to wait 6 months to a year for the next book to be released, I waited until I could download a copy through the library, even though there were a ton of people that had it on hold in front of me, and it ended up taking at least another couple of months.

Now that I have given you a little insight into just how cheap I am when it comes to reading, let me reiterate it for you: I BOUGHT this book!!

When I started this book, I still had a little bit of a book hangover after reading the Graceling series, and I was looking for another book that would help cure it. This was a good choice!

As some of the other reviews on GoodReads pointed out, this book does have some similarities to The Hunger Games. However, it is definitely not a complete replica.

This book has a very unique concept: there is an asteroid that is weeks away from destroying the world, which has turned into a dystopia in anticipation of Pandora (the asteroid), with an evil Emperor leading them all to their doom in "Uploaders" that look like caskets. In there, people will upload to the consciousness of the Chosen 100.

The Chosen and the Goles, the elite, or at least the ones that aren't suspected of sympathizing with the rebels or using banned technology, all get to ride out the end of the world on a space station.

I really liked this book, but I also felt like the author could have added more explanation into some places. It was still great, though!

I'm glad I have the next book on hand (thanks again, NetGalley!) and don't have to wait to see what happens next!

I will post my review of the sequel to this book, Shadow Rise, in a few days.