Shade (The Shade #1) by Marilyn Peake 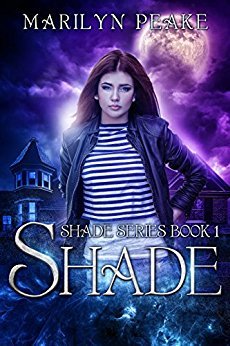 Thanks to her offbeat mother, Shade's full name is Galactic Shade Griffin. Having a name like that while being the new girl in school is pretty much catnip for bullies. The summer before Shade's junior year of high school, her mother breaks up with yet another boyfriend and moves them once again to a new town.

This time, they move into a dilapidated old house where Shade has an entire attic bedroom to herself-at least until she discovers it's haunted by the ghost of a teenaged boy named Brando Yates. When Shade's best friend goes missing, her life becomes even more complicated. With the help of Brandon who's struggling with his own issues in the world beyond, Shade faces the question of whether or not she has what it takes to become a true hero.

Although this novel deals with a number of serious issues - drug and alcohol abuse, cutting, and disturbing world events - it's primarily a novel about a teenaged girl finding out who she really is and that she's capable of so much more than she ever thought possible.

I've been getting Marilyn Peake's emails for a while but had never read any of her books, so when I got an email about joining her ARC team, I jumped on the opportunity to check out some of her work.

This book is about Galactic Shade Griffin, aka Shade, a teenager with a drug and alcohol addicted mother who has just broken up with yet another boyfriend and moved her and her daughter yet again. This time, her mother moves them into a haunted house. When girls start going missing from Shade's school, the ghosts help solve the case.

The amount of mature, potentially triggering topics in what I assumed was a light-hearted YA fantasy book was really surprising. Pretty quickly into the book, Shade starts cutting herself. She then sees a ghost, and the knife is flung from her hand and her arms are healed. The ghost tells her that she should do art instead of cutting herself.

In some ways, I would think this book should be considered Middle Grade, because of the writing and the maturity of some of the characters. However, there were many topics that were completely inappropriate for MG books, like human trafficking and abortion.

I'm not sure what else to say about this book. It was kind of over the place, I am interested in checking out some of the author's other work, though. Next, I am going to try The Other, which is supposed to be a sci-fi book that features aliens. The reviews on GoodReads are much more positive than they are for this book, so I'm hopeful. I'll let you know what I think!

Posted by Meet Your New Favorite Book at 11:57 AM