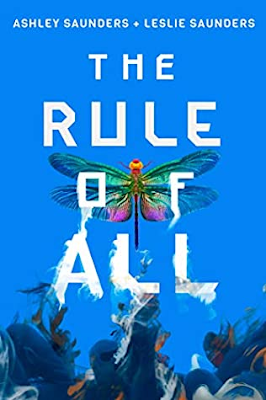 As America's twenty-first-century revolution reaches its endgame, twin sisters must outrun, and outlive, the Common enemy.

Outlaw twin sisters Ava and Mira Goodwin were born to defy Texas' tyrannical and oppressive Governor Roth. They inspired millions across the country to liberate themselves and fight to live free under the new Common rule. But an enemy still endangers their fragile vision for the future. Ava and Mira's mission: hunt the man down.

The once-mighty Governor Roth has fled Dallas. Holding a hostage beloved by Ava and Mira, Roth has a mission, too: regroup his Loyalists, wreak havoc, and reclaim his power.

With the help of a savvy programmer turned rebel warrior, Ava and Mira brave a journey more uncertain than they've ever attempted before. As they forge southward into foreign territory-- against a ruthless cartel, Roth's aggressive Texas Guard, and a formidable new foe--courage, alliances, and trust will be tested. Now, in the most unlikely and treacherous of places, the sisters must finish what they started. Before they--and the Common are erased from history forever.

If you have not read my review of The Rule of Many, read it here.

It has been almost a year and a half since I read the first two books in this series. I probably should have re-read them before starting this book.

I remember being sucked in by the first book and immediately speeding through the second book after finishing the first. It took me longer to get into this one. However, once I started getting back into the story, I sped through it, just like I did the first two books.

The beginning of this story is a little slower, but about 1/3 of the way through the book, the action picks up, and it is just as action-packed as the first two books.

I think this was a great wrap up to the series! I was really impressed with the twists the authors threw into this book and the new characters.

I would love to read another book or perhaps a book set after this one from someone else's POV. There are some questions they did not answer with the ending that could lead to another book! I would definitely read it!

Thank you to the authors, publishers, and Netgalley for providing me a copy of this book.

Posted by Meet Your New Favorite Book at 10:00 PM

Email ThisBlogThis!Share to TwitterShare to FacebookShare to Pinterest
Labels: Ashley Saunders, Ava Goodwin, Ciro, Common, Haven, Leslie Saunders, Mira Goodwin, Rayla, Rule of All, Saunders Sisters, Texas, The Governer, The Rule of Many, The Rule of One, Theo