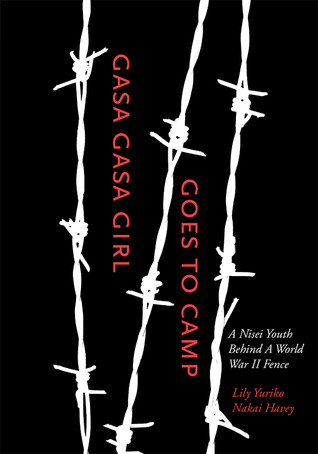 For those of us who were not born at the time of the bombing of Pearl Harbor, the Japanese, and the Asian people as a whole in the US, were treated like anyone that looked Arab was treated after 9/11. Gasa Gasa Girl goes to Camp is the story of one girl’s experience [n the Japanese camps after the bombing of Pearl Harbor. When her family first departed for the camp, Yuriko thought her family would go camping in the woods in a tent, just as the all-white Girl Scouts got to do every summer. The reality of the ugly, black buildings upon their arrival was a shock to the young girl. She thought the camping trip would be the beginning of a new relationship with her father, instead, he turned into an “elusive shadow” that summer, a stranger to his family.

Her family went from living in “Hollywood, a poor section, to be sure, but Hollywood,” to living “in a barrack at a racetrack.” Her father retreated into a bottle. The rest of the family “internalized the principles of gaman and shikatanagonai…teaming not to verbalize fears, frustration and conflict,” and gambano, meaning “take whatever life brings.”

“Stoic and principled Japanese were supposed to handle unbearable situations in this matter.” Her parents both had terrible childhoods and now their daughter was experiencing, not at the hands of her parents, “but at the hands of the government that promised them freedom and a better life.” Yuriko was terrified of even using the bathroom at night for the fear of being shot by American guards.
Yuriko did not identify with the Japanese that bombed Pearl Harbor. “The Japanese - these other war mongering Japanese – had deprived me of those things. However, I sensed that somehow OUR American government, MY American government was also responsible. It had made the decision to rip thousands of people from their homes and place them in isolated camps.

Yuriko spent three years in the camp, growing and maturing in them. When it was time to leave, she couldn’t remember much about “real life.” She wasn’t sure if it would be better than the camp and was unsure about the unfamiliar and unknown.

Lately, I have been reading a lot about the Holocaust and individuals’ experiences in the concentration camps. So, when I saw this book on NetGalley, it peaked my interests. I had not read any accounts of individual experiences in the Japanese camps and didn’t really know much about them or about how life was for Asians in American during the time after the Pearl Harbor bombing. This book opened my eyes to the similarities between how people reacted after 9/11 towards anyone that looked Arab or Muslim.

I just finished a Multicultural Diversity class, and many of the themes in this book fit along with things we addressed in class. In fact, I am going to suggest this book to my teacher. It gives you great insight into the life of Asians during that time, and I think it is important for people to read things like this. When individuals do something bad, it does not mean that their entire race is bad. This is something that speaks to our society today just as much as it did during Yuriko’s story.

I received a copy of this book for free from the publishers via NetGalley in exchange for an honest review.

Posted by Meet Your New Favorite Book at 9:42 PM