Kanye West Owes Me $300: & Other True Stories from a White Rapper who Almost Made it Big by Jensen Karp (A Review) 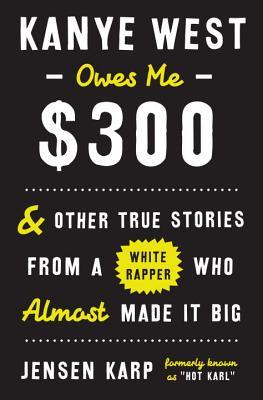 After Vanilla Ice, but before Eminem, there was "Hot Karl," the Jewish kid from the L.A. suburbs who became a rap battling legend--and then almost became a star.

When 12-year old Jensen Karp got his first taste of rapping for crowds at his friend's bar mitzvah in 1991, little did he know that he was taking his first step on a crazy journey--one that would end with a failed million-dollar recording and publishing deal with Interscope Records when he was only 19. Now, in Kanye West Owes me $300, Karp finally tells the true story of his wild ride as "Hot Karl," the most famous white rapper you've never heard of.

On his way to (almost) celebrity, Jensen shared his childhood run-ins with rock-listening, southern California classmates, who tell him that "rap is for black people," and then recounts his record-breaking rap battling streak on popular radio contest, "The Roll Call"--a run that caught the eye of a music industry hungry for new rap voices in the early '00s.

He also introduces his rap partner, Rickye, who constitutes the second half of their group, XTra Large; his supportive mom, who performs with him onstage; and the soon-to-be-household-name artists he records with, including Kanye West, Redman, Fabolous, Mya, and will.i.am.

Finally, he reveals why his album never saw the light of day (two words: Slim Shady), the downward spiral he suffered after, and what he found instead of rap glory.

Full of rollicking stories from his close brush with fame, Karps's hilarious memoir is the ultimate fish-out-of-water story about a guy who follows an unlikely passion--trying to crack the rap game--despite what everyone else says. It's 30 Rock for the rap set; 8 Mile for the suburbs; and quite the journey for a white kid from the valley.

I’ll  admit it, I wanted to read this book for the title alone…. And I expected it to be funny.
The book was not quite what I expected, but it was as enjoyable as I wanted it to be.

It is the story of another white rapper, who was coming up at the same time as Eminem. Although he made quite a bit of money, nothing ever came of his Big Break, because he was railroaded by Eminem (or Eminem’s people, as is specified several times in the book). I guess they didn’t want to place the blame too heavily on Eminem.

The fact seems to be true today of female rappers. There can only be one at the top, as you can see from the shade Nikki Minaj threw at Iggy Izalia at some award show. As was back in the day of Eminem’s rise to fame….

Who knows, perhaps the guys at the top thought it would be too much for us to handle: TWO white rappers.

This is the reason I never heard of Hot Karl, until I read this book, that is. I have to admit, it was kind of strange reading his lyrics, instead of hearing them actually set to music (especially hearing the lyrics in my head with my not-so-rapper-ish voice and no beat). He is pretty funny though.

Don’t feel too bad for him, not making it big in the rap game, though. He did pretty damn well for himself and owns a crazy popular pop culture art gallery, and does about a million other things that he’s successful at in Hollywood… as Hot Karl (or Jensen, as he goes by now), said recently, ALMOST equivalent to the club promoter of Hollywood… but not quite. (yes, I’ll also admit that I Googled Hot Karl after finishing the book and watched a few minutes of a podcast he was a guest on, promoting the book.


That’s gotta tell you that it was good. It doesn’t matter if you like rap or not, it’s a pretty funny book,

I would recommend it to anyone, as long as they have a little knowledge of early 2000 music, otherwise, you won’t get a lot of the references.

Check out my GoodReads review of this book!

Posted by Meet Your New Favorite Book at 1:18 PM