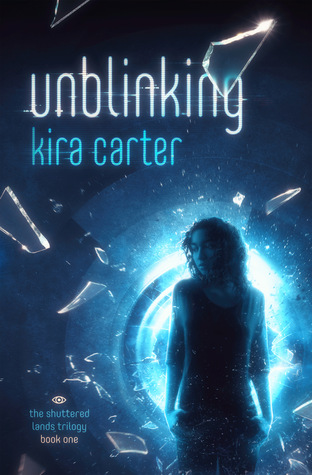 Minka Stanis just wants to be left alone - impossible since the Eyes record and broadcast every momeny of her day. Then, a humiliating incident in the high school cafeteria makes her the laughingstock of her tower city, and life behind the glass walls becomes unbearable. When the intriging new boy at school tells her about a place away from the gaze of the cameras, Minka plots her escape from the towers. But the Shuttered Lands are across the desert, and going there will mean leaving everything she's ever known behind.

Fresh out of tower training, Zedd Fincher is settling into his dream job. When he gets assigned to edit Minka Stanis' Stream footage, he spins her every misstep into a string of hit clips. As Minka's fame grows, so do Zedd's feelings for her. But a crisis at home brings the darker side of his work into focus. And Zedd soon learns editing other people's lives has consequences.

As Minka is thrust unwillingly into the spotlight and Zedd's life begins to unravel, only one thing is certain:

The Eyes are always watching.

It took me a while to get into this book. That could have something to do with the fact that I was re-reading the Throne of Glass series at the same time. I NEVER read more than one book at a time, but I made an exception. I have several books to read and review before the end of the year, but I have been on hold for a copy of Tower of Dawn from the library, since it came out a couple of months ago. Since I was starting to get close to the front of the line, I decided to start re-reading the ToG series as a refresher, after I had already started reading this book.

I got through all of book one and started book two, then I got an email saying that the hold was up and I could download a copy. So, I clicked the link and went to the library's website on my phone. I selected Kindle format and clicked download, or so I thought. Then, a notification popped up that said "Your hold has been cancelled." I seriously almost cried. The download button is directly on top of the cancel button, and I don't know if my phone glitched or I just clicked the wrong button on accident, but I cancelled the hold. I immediately went back and placed a new hold. When the book was first released a couple of months ago, I started out as #25 of of 25 in the hold line. Now, I am #31 out of 31... I was so upset, because I have been waiting SO LONG to read this book and was psyching myself up by re-reading the series. I figured I would go ahead and finish re-reading the first 5 books then just by Tower of Dawn so that I don't have to wait so long.

Then, I thought about it... I could but Tower of Dawn and go ahead and read it quickly, before getting back to the books I have scheduled to read and review. But the next book in the ToG series isn't scheduled to be released until next September. That would leave me Maas-less for almost a whole year... So, I decided to just wait a few months to get a copy from the library. I have lots of good books to read in the mean-time. Then, I won't have to wait as long to read book #7 after finishing Tower of Dawn.

Once I decided to wait and finished book #5, Empire of Storms, it was much easier to get into this book, and I really want to see what happens next.

I have mixed feelings about Minka in this book. I hate how gullible she is and how easy it is to convince her to leave everything she has ever known and do something that is unheard of and considered impossible. However, when you consider where she lives and her upbringing, the way she acts is more understandable.

The author did a good job at world building, and the story's concept was interesting and not much of stretch from what could happen in the near future. Basically, the Eyes are everywhere. Every minute of everyone's day is recorded to their Stream. The only placed with no Eyes are in restrooms, and each person has a "Reserved Room." However, spending too much time in your reserved room is suspicious.

Everyone in the Towers has a job. It is the editors' job to sift through everyone's daily streams and edit clips for different channels, which are similar to what we all watch on YouTube today, like "fail" clips, giggling babies, and embarrassing moments caught on camera. And just like today, having clips that get lots of views can make you famous, and lots of people in the Towers want to be Stream Stars. Like I said, not a stretch from what could happen in the near future.

The only difference in the book is everyone lives in a a circle of towers, and they never leave. Outside is a sweltering desert with dangerous sandstorms, and they have their food-like cubes brought in from the Fertile Lands.

Although this book took a while to get into, I did get really into it by the end, and I think the author did a great job at setting up for an action-packed sequel. I can't wait to see what happens next!

Posted by Meet Your New Favorite Book at 12:35 PM