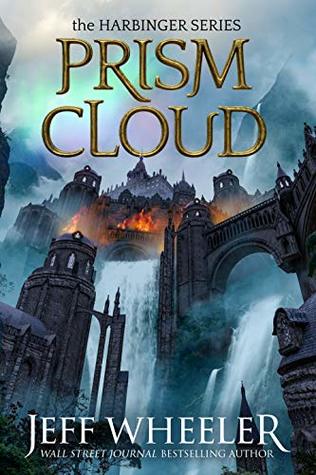 When the emperor is assassinated, Sera Fitzempress is the noble most eligible to inherit the empire. Her upcoming marriage to the prince would cement her position. And as a champion for peace, Sera is the only promise of hope for staving off war between the worlds of Kingfountain and Muirwood. But standing between her and her enemies is just one devastating secret.

Sera's best friend, Cettie, a girl born of a lower class, has made a shattering discovery: her entire existence has been a lie. Now, Cettie must give up the only life she's known and fought for and leave behind the man she loves to stop Sera's wedding. For this discovery could bring the whole Kingfountain to ruin.

As Cettie struggles to determine her true loyalties and loves, her allies fall to wicked plots, and she becomes increasingly alone on her journey to a destiny she never wanted- one that could ignite an unstoppable war.

If you have not read the first books in this series, I recommend starting with my reviews of them. Here are the reviews to the first 3 books:

I didn't see anything from this book coming!

I don't want to give anything away... I don't even know what to say right now that won't give away any spoilers...

I thought this book was going to be the last book in the series. I didn't realize there was going to be one more book after it, so this may have influenced my expectations. I expected things to end happily in this book, or a least happy-ish.

Everything in the series has been leading up to this book. During the first few books, the author did an excellent job of character development and world building. In this book, he switches everything up and lets us in on some huge secrets as to how everything fits together.

TBH, I loved Cettie in the first 3 books. I'm not really sure how I felt about her in this book... I know I didn't feel the same though (ugh! It's so hard to do this without giving away spoilers!) I have faith that she will redeem herself by the end though.

I do know how I felt about Sara in this book! In the first 3 books, I really liked her, but I feel like she finally blooms in this book.

I will try not to include too many spoilers to this book, besides what is alluded to in the synopsis above from GoodReads.

However, it's like everything turns upside down in this book!

In the last book, things have started settling down a bit for Cettie and Sera, and it seems that way at the beginning of this book, as well. It definitely doesn't stay that way though!

Look at this AWESOME artwork from Jeff Wheeler's website! This link will take you to the page that talks all about the world in this series. Check it out!

I absolutely can't wait for the next book in the series, Broken Veil, to be released. Jeff Wheeler's website says it will be released on June 11, 2019.

I received a copy of this book from the publishers, via NetGalley, in exchange for an honest review.
Posted by Meet Your New Favorite Book at 2:00 PM