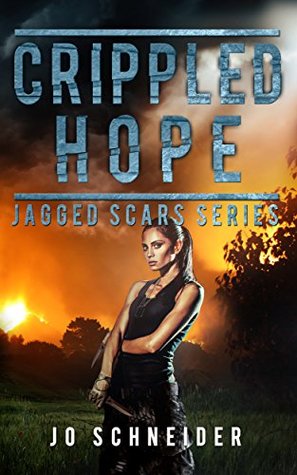 Reeling from the fall of Shelter, and mourning the loss of too many friends, Wendy and the battered survivors must leave their broken home in search of another. As Jeff tries to keep the council together, Wendy rallies the remaining fighters in their defense, but more deaths and a clash of wills divide the people. Some insist they fight, others wish to run while a growing number desire to surrender to the Primate, falsely believing he will show them mercy.

Up until now, Wendy has been able to slash her way out of anything, but her knives prove useless as hunger, disease and discord threaten to rip not only the group apart, but also the growing relationship between her and Jeff.

First of all, for those who have not read the first three books in the Jagged Scars series, check out my reviews of Fractured Memories (#1), Severed Ties (#2), and Shattered Dreams (#3).

The series is the story of Wendy, who is a ferocious fighter. She is a super smart and super dangerous. She lost her home to Skinnies (zombie-like people-ish things) and was saved and brought to Shelter, where she struggled to fit in and start learning to trust others. She ended up making friends at Shelter, but then it is threatened by the same person who ruined her home and killed her family: The Primate, who was working with Pelton, who taught her everything she knows about fighting, then betrayed her. At the end of Shattered Dreams, only a small fraction of the number of people that lived in Shelter survived blowing it up to save them all from the Primate and prevent him from taking over and gaining access to their advanced technology.

Crippled Hope picks up right where Shattered Dreams left off. The survivors from Shelter are moving through the tunnels they used to escape and get away from the Primate and his Skinnies.

These books definitely move fast! Just about everything that can go wrong does, and there are so many twists and turns thrown in. The series does that from the beginning. It is action-packed, but not rushed. The author gives you plenty of character and plot development in between the action.

All I could say after finishing this book was OMG!!! I'm so mad that I can't read the next book yet! I was thinking that the book was going to end at a certain point and was cool with that stopping point, then the author threw a major curveball. Then the book just stopped. OMG!

So far, I've loved absolutely everything about this series, but the ending to this book is frustrating if you don't have the next book to keep reading.

The author has done an amazing job with this series, though. Each book left me needing to read the next one and find out what happens next. However, there was usually a nice stopping point at the end, setting things up for the next book in the series, without making me too upset that I didn't have the next book yet. That was not the case with this one.

Each book has made me ♥ Wendy more and more! She stays true to her bad ass self throughout all the books, but she continues to grow and develop as a person throughout each one. And of course, I still ♥ Jeff and Kev! They were great in this book, as always!

GoodReads says that the 5th book in the series, Broken World, will not be released until at least this December. I don't know if I can wait that long to see what happens next!

Posted by Meet Your New Favorite Book at 12:14 PM