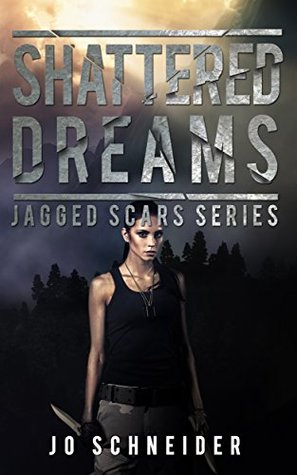 Wendy has wrestled the monster in her head into a corner where she hopes to keep it at bay. Thanks to her and the other fighters, Shelter is safe, but the victory didn't come without loss. During the Writing on the Wall - a tribute to the dead - Mike announces his plan to go after Pelton and his people. Wendy is the first to volunteer.

But Jeff has other ideas. He asks Wendy and a few other trusted fighters to join him on a team that will go in before the main force and wreak havoc in the complex. The price? Wendy has to lie to the rest of her friends and pretend to date Jeff to cover for the time they spend together. Which would be okay if Wendy didn't actually have feelings for Jeff. But the worst part, the part Wendy isn't sure she can live with, is that Pelton might get away, and she will never avenge her family.

When Wendy got to the computer lab, she keyed in the code and turned the handle.

She'd expected it to be deserted, but Hound and Cal were huddled around a set of three computers, their heads together and their finders typing like mad.

Jeff was in the far corner.

"I figure we can sleep when we're dead," Hound said with a grin.

Wendy shook her head and moved to the computer that had the typing tutorials on it. She'd been through them all a few times, but she still wasn't quite fast enough to do most of the drills Mike put them through. It had taken her a while to accept it, but this skill might be as important as fighting at some point. Hopefully the need to use such skills would never fall on her, but if it did, she wanted to be prepared.

The screen came to life, and Wendy clicked on the icon for the tutorial. The familiar picture of the keyboard came up, and she positioned her hands on the real keyboard.

Wendy kept up with the pace of the tutorial. The words got longer and more complicated. She got lost in it for a while, then the faint hiss of a chair moving told Wendy that Jeff had stood. A few footsteps and she knew he was coming toward her.

The letters started to pop up on the screen. Wendy tried to relax and let her muscle memory do the work.

Jeff's footsteps got closer. He pulled out the chair next to her and sat.

"You don't have to watch me," Wendy said. "I think I've mastered loading the tutorial." She silently rejoiced as her fingers kept going, even when she was talking. They slowed down, but didn't start typing what she was saying, which had happened more than once.

"I finished my stuff. Thought I would say hi."

The "i" slipped into the word rock. Wendy made a face.

Jeff continued to watch, which made Wendy a little nervous. After a few minutes, she glanced over.

Jeff scooted his chair toward her, and leaned in until his lips were just inches from her ear.

"I've been thinking. I might need to use you as an excuse to keep Matt off my back."

He leaned closer, and whispered. "I mean, I think I need to tell him we're, uh, seeing one another."

Wendy furrowed her brow as "clock" came up. "What do you mean?"

Wendy's fingers froze. Her mind froze. Her neck froze, and she could have sworn it cracked as she turned to meet his gaze. "What?" she whispered.

I absolutely loved Fractured Memories and Severed Ties, so when I got the opportunity to join the author's review team and read the rest of the series, I jumped at the chance to read more!

I had high expectations for this book, after reading the first two books in the series, and this book definitely didn't disappoint!

I can't say enough good things about this series! I love everything about it!

I even like the romantic aspect, which, if you've read pretty much any of my other reviews, says A LOT. The author didn't slap a cookie cutter love triangle in the middle of this story, and she didn't turn the main character into an idiot over a stupid crush.

The ending of this book was perfect. It set things up perfectly for the next book in the series, without leaving me too upset that I didn't have the next book yet to immediately keep reading.

I definitely recommend this series! If you haven't read the first two books yet, I encourage you to check them out! I promise, you won't be disappointed!