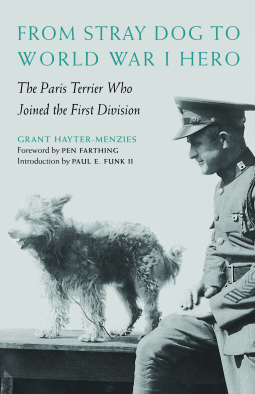 The beginning stated with the end. The book introduces a soldier at the time of his death and burial. It describes honors, unconditional loyalty and the praise received from the many people (and publications) that recognized his heroism while mourning him.


This soldier of the Great War was buried wearing marks of past glory, but no uniform, because this soldier was a dog, a mutt of indefinable ancestry.


The book emphasizes that animals have no choice when it comes to war. However, that was not true for Rags. Despite his handlers tries to keep Rags from the front lines, where it was safer, Rags refused to leave his side. He saved many lives because of this.

It is the story of a dog rescued by a soldier who himself serves to rescue soldiers. Rags was found, a stray, roaming the streets of Paris in 1918. From there, he became a member of the First Infantry Division. The "scruffy, taffy colored terrier of about 25 pounds, with floppy ears, fluffy arching tail and perhaps more than a dollop of poodle in his blend" became a mascot to his division, and a legend to people all over the country.

Rags was not interested in learning tricks, he was a war hero for goodness sake. However, he did let his handler, Donovan, teach him one... Donovan taught Rags to stand on his back legs and raise his paw over his eye when he saw soldiers saluting. He remembered this "trick" long after the war was over, even after his best friend died.

Perhaps one of my favorite stories of Rags happened when he got separated from Donovan during the war. He stayed with the First Division men on their journey, though. He made friends with two men that were tasked with rising up into the air in a balloon in order to map out enemy locations. After giving him some food, Rags fell asleep in the balloon's basket. The men left Rags to rest while they worked, perhaps the quietest sleep he got during the war. However, later, someone started shooting at the cables that tethered the balloon to the ground, and the men could see a German plane flying low, coming straight toward them. The men put on their parachutes and jumped, one carrying Rags under his arm. The men reported that the German plane got close enough that they could see the pilot stick his head out of the cockpit in confusion. The men saw the pilot smile and wave, then fly away, apparently not wanting to kill the men and their dog.

Rags saved those men's lives, and he saved many more throughout the war. Unlike the purebred dogs that underwent intense training to deliver messages, Rags was a stray and learned from his handler (who had no training but loved animals) on the fly, during the war. Donovan was a communications specialist, and Rags learned to run ahead of him in order to find broken wires for Donovan to fix. He also learned to successfully relay messages, something that many of even the bravest and fastest dogs could not accomplish.

Possibly most important, Rags boosted the spirits of many men surrounded by war.Rags meant something special to everyone he came into contact with. Even late in his life, Rags did not belong to any one person or family, he belonged to the American people.


The irony is that soldier dogs make war a little more human.

I recommend this book for any animal lover.

Disclaimer: Rags' story is very touching. May cause tears.

I received this book for free from the publisher via NetGalley in exchange for an honest review.

Posted by Meet Your New Favorite Book at 1:45 PM