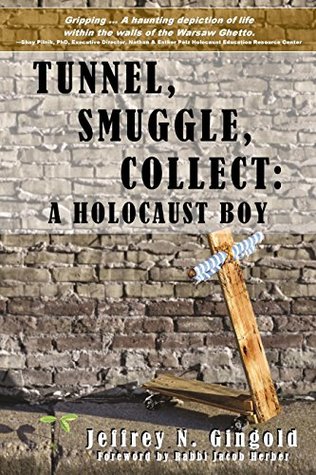 I’ve been reading a lot about the Holocaust lately, mostly accounts of individuals who witnessed the atrocities committed in concentration camps. However, until this book, I have not had the opportunity to read an account of an individual who witnessed life inside the Jewish ghettos during WWII.

The braveness of the people that lived through these horrendous experiences never ceases to amaze me. At the beginning of this book, Leah gives birth to a baby boy inside of a city and a hospital that is being bombed, with walls crumbling down all around her. Merely a day later, she takes the long trek out of the city with thousands of other people, carrying the swaddled baby while having to run from ditch to ditch in order to avoid the German planes shooting into the masses of people fleeing the city.

Duvid led his wife, her brother and sister, his 6 year-old son and his 1 day-old baby out of their city, while it was being bombed, guiding the family to jump into ditches frequently to avoid the German planed that flew overhead, shooting into the thousands of civilians escaping the bombings, lasting throughout the day, until nightfall. Unfortunately, when the family made it to the Russian border, the Russians handed them over to the Germans, who returned them to the city after their death-defying escape.

Sam and his family were taken to the Warsaw ghettos, where they were forced to share a small apartment with 4 other families. His family of 4, along with Leah’s brother and sister, crowded into one bedroom. Leah and the baby slept on the only mattress, the rest of them “positioned themselves like a set of spoons all facing the same direction. One could only turn if they all turned together.” The family only had 2 blankets, one for the baby and the other had to be passed around and shared.

The family clung so hard to their Jewish heritage, which helped them see some good in everything bad that was happening to them. When another family moved into their already overcrowded apartment, a mohel was among them, which allowed the baby his bris ceremony and circumcision, even if it was a month late. The ceremony made everyone present happy, even those that were not a part of the family and had only met them upon arriving at the ghetto.

The bris was a ritual that affirmed the past, while facing the unknown. It was the only time Sam and his family would smile in the Warsaw ghetto and the last time they would be happy in Poland.

Unlike most others who gave up and died of starvation or waited in hopes that things might eventually get better, Duvid took his family’s future into his own hands. Although it meant teaching his young son to hide and guide his way through the dark and dangerous streets of the ghetto and its secret passages, Duvid would feed his family and find a way to escape from the Germans.

I especially admired Sam’s father, Duvid. Although the family went through a terrible experience, they were lucky in the sense that they were able to remain together during it, with Leah’s brother and sister able to stay with them until they successfully escaped the ghetto.

I really enjoyed this book! It gave a unique perspective of the Jewish ghettos, while many books tell of experiences in the concentration camps or fighting in the war. I like being able to read many different experiences during that time. This account is well-written and keeps the reader engaged throughout the family’s long journey to safety and freedom.

Posted by Meet Your New Favorite Book at 10:24 PM